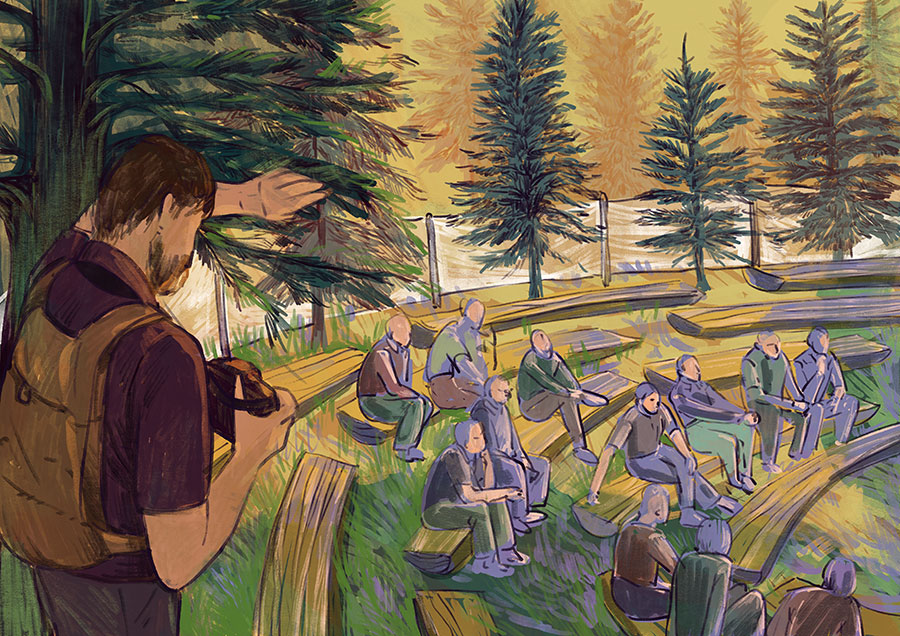 The unmade photo by:
Remus Țiplea

In 2012, I was photographing for a project about religious beliefs. With this project, I tried to show the things that were less visible about religion. That’s how I ended up trying to photograph a gathering of Pentecostal extremists. I went about 200 km away from where I live, somewhere at the border of Maramures and Salaj counties. I left the paved road, rode along a forest road for about 20 km and found a parking lot where I was able to pay to leave my car. I then followed mountain trails for about 9 km, all the way to the top of mount Tibles. This is where the gathering took place and they only accepted men who would spend 3 days and 3 nights praying and fasting.

Everything seemed to me, to the photographer in me, magnificent and everywhere I looked I could take an amazing photo. It was full of tents. In a meadow surrounded by huge pine trees, at the top of a mountain, there was this sort of shrine, surrounded by wooden benches, about 20 or 30 meters long, made out of big pine trees split in two. The benches were laid out in a sort of an amphitheater and the entire perimeter was surrounded by a nylon foil wall that you could not see through.

When I got there, all sweaty, wearing a beard and in shorts, I took out my camera wanting to take photos of the people who were praying. Someone quickly told me that this was not allowed and when I went to a different part of the amphitheater and tried it again, another voice in the crowd told me the same thing.

I went to the leader of the gathering, and the Pentecostal person who had brought me there explained to him what I wanted to do, but I was still told that it was not allowed as this is what they had decided at the beginning of the 3 days, that filming and photographing were forbidden.

A long time after that, when I would try to fall asleep, I would see the entire situation there and imagine the photos I could have taken

100% oșan (from the Maramuresș area), both in mind and spirit, I am 48 years old and I have been taking photos for 12 years. Photography and family are the things I believe in and which I love. I am an amateur photographer and, every once in a while, I do macro photography. I like projects that involve endurance documentary photography and I have completed 2 of these, working 10 years on each: From Oaș to Easter and My God.

We use cookies on our website to give you the most relevant experience by remembering your preferences and repeat visits. By clicking “Accept”, you consent to the use of ALL the cookies.
Cookie settingsACCEPT
Manage consent